You can fly away with the cast of Peter Pan 360 in Tyson’s Corner… but only if you believe in fairies, of course.

This spectacular new stage production of PETER PAN — making its Washington area premiere — will have you flying with Peter (Dan Rosales), Wendy (Annapolis native Sarah Charles), John (John Alati), Michael (Scott Weston) and Tinkerbell (Jessie Sherman) over 400 square miles of virtual London all the way to Neverland to play with the Lost Boys via the magic of Hi-Resolution projection. 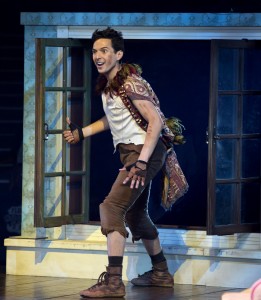 kind Threesixty Theatre, which features 15,000 square feet of phenomenal panoramic projection, transporting the characters and audience from the deck of Captain Hook’s ship, to the Mermaid lagoon and beyond.  Now, the traveling sensation brings that same Threesixty Theatre to Tysons Corner Center, featuring 20 actors, stunning puppets, epic music, and dazzling flying sequences, all performed in the round, so that both cast and audience are immersed in a virtual Neverland.

Audience participation is a part of every lively performance, and this 360 show was no exception.  Original songs have the audience dancing and clapping along — reminders of previously known movie favorites.

At one early showing, Captain Hook asked a little boy in the front row, “Do you fear me?” to which the boy promptly yelled playfully, “No!”  And of course Hook was boo’d by the audience when recruiting the Lost Boys, John, and Michael to join his crew.

Tinkerbell was brought back to life after drinking poison… with the audience’s help. Grown women, men, and children alike shouted at the top of their lungs, “I BELIEVE IN FAIRIES.”

This Threesixty experience has laughter, moments of awe, and a classic family favorite that still serves as the perfect bedtime story for children and adults alike.

Peter Pan plays at the Threesixty Theatre in Tyson’s Corner through August 16th.