James McNeill Whistler’s famed Peacock Room was a sumptuous 19th-century dining room and icon of American art.  Painter Darren Waterston’s “Filthy Lucre” takes the famous masterpiece and reimagines it as a magnificent ruin, which you can see now at the Smithsonian’s Sackler Gallery. 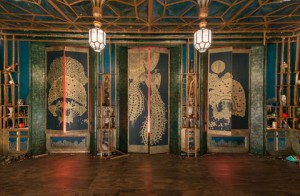 Replicating almost every detail of Whistler’s beautiful space — with a transformation of excess and destruction — Waterston’s room is the centerpiece of “Peacock Room REMIX,” an exhibition that studies the rift between art and money, ego and patronage… and the Peacock Room’s own exquisite beauty and contentious past.

According to the Smithsonian: “Peacock Room REMIX” is inspired by both the artistic mastery demonstrated by the room — long regarded as the period’s greatest surviving decorative interior — and Whistler’s bitterness over its creation. Initially invited by his friend and patron Frederick Leyland to consult on the room’s color scheme, Whistler proceeded to cover every inch with painted peacock motifs in shimmering golds, blues and greens. Leyland was furious at Whistler’s audacity, and the home-makeover gone awry spiraled into a clash over artistic freedom. Fueled by dueling 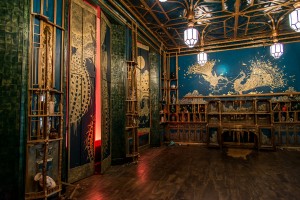 egos, the argument was splashed across London’s society tabloids, turning the once-intimate friends into mortal enemies.

“I set out to recreate Whistler’s fabled Peacock Room in a state of decadent demolition –a space collapsing in on itself, heavy with its own excess and tumultuous history,” says Waterston.

Visitors step into “Filthy Lucre” and enter an alternate reality where beauty is pushed to its limits and goes awry.  A soundscape created for the space by Washington, D.C.-born, New York City-based girl rockers BETTY emanates from the walls, resonant with muffled voices and mournful cello. An eerie orange light glows behind the shutters of the room’s windows, and the fighting peacocks –named in Whistler’s mural “Art and Money; or, The Story of the Room”– turn violent in Waterston’s version, gruesomely disemboweling each other.

If this sounds fascinating… it is.  More fascinating?  The exhibition is the only chance for visitors to experience Waterston’s creation alongside the original Peacock Room, which is a permanent showpiece of the Sackler Gallery’s adjacent Freer Gallery of Art. 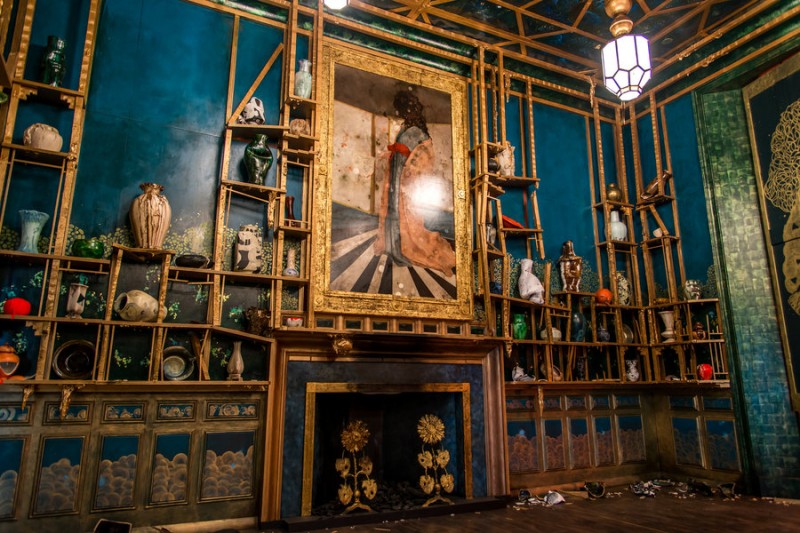 Previous Post: The Ritziest Way to Join the Rolling Thunder this Wknd
Next Post: Gourmet Symphony Offers Diners ‘A New Taste in Music’