To commemorate France’s national holiday, PAUL – one of the most famous of the French bakeries – invited the public to participate in its 3rd annual “Bastille Day Baguette Relay Race” which took place in 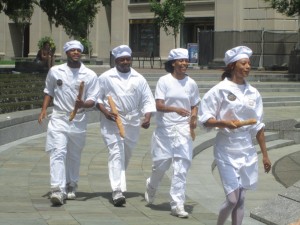 Relay team members (in both children’s and adult races) took turns “fast-walking” a lap around the plaza of the US Navy Memorial with a fresh baguette in hand, in lieu of a traditional baton.

Robert Osberger (lead image, above) was the first to cross the finish line in the first of three adult relays (this event was popular!), winning each member of his team a gift card to PAUL and an Alliance Française tote bag filled with francophile fun.