Washingtonians young and old weathered the cold on Wednesday night to join the party at the Warner Building on Pennsylvania Avenue, where the Entertainment Software Association (ESA) was celebrating the video game industry trade group’s 20th anniversary.

In addition to the usual combination of music, food, and drink, ESA provided games and machines to permit partygoers to try their hands at everything from modern, highly-computerized, high-definition first-person-shooter games like Call of Duty to classic video-arcade games like Space Invaders and PacMan. There was even a pinball machine available for truly old-school pinball wizards.

ESA makes a point of the fact that video games are not just for nerdy young boys anymore. According the Association, the average video game player is 31 years old, and 51 percent of households own a dedicated video game console. 48 percent of players are women. They also point out that consumers spent over $21 billion on video games last year. In the words of ESA spokesman Ali Amirhooshmand, “ESA is happy to celebrate 20 years of advancement, technology, and contributions to the economy” offered by the video game industry.

Washingtonians were happy to celebrate, too.  Who’s up for a game? 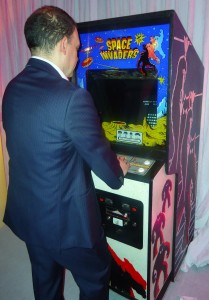