“Special drinks & dishes to entertain the living and honor the dead,” reads the invitation to Oyamel’s kick-off to its Day of the Dead special celebration.  Not scary.  Just scrumptious!

Beginning its annual celebration of the ancient tradition, Dia de los Meurtos, the Mexican restaurant celebrates the dead — and entices the 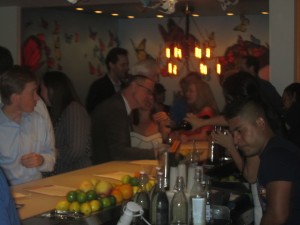 living — by tempting souls to linger with food, drink and fun.  While “spirit animals” are offered on Day of the Dead alters for any ethereal in attendance, indigenous traditional Mexican recipes make up the menu for the more substantial set.  And there aren’t any you’ll be willing to sacrifice!

In honor, or jest, of this year’s political deathmatch, the festival honors Jose Guadalupe Posada, a turn of the century artist and political cartoonist best known for his satirical skeleton illustrations.

Posada, who died penniless and all unknown in 1913 before his work was revived in the 20’s will be pleased to be feted with dishes like Caviar de Chapala, Ostiones pimenton (oysters), and Chichilo negro (slow cooked short rib) and anointed by the Resucito cocktail (a Maestro Dobel Diamond tequila cocktail with Cocchi Americano Rosam kime leaf and grapefruit bitters).

Dishes to die for!

Previous Post: [Party Pix] Inside Andre Wells’ PLAY Party at Teddy
Next Post: A “Drive-In” That You Don’t HAVE to Drive In – EXTENDED