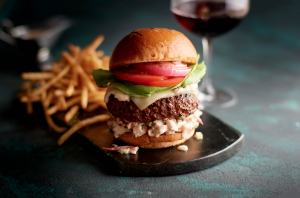 Is there anything more American than a thick juicy hamburger?  In the United States we respect our burgers so much we made a National Month for them (May)!  And while hot dogs also get a lot of love at Independence Day barbecues… we’re still a little partial to a prime beef patty.
Not too long ago, Morton’s on Connecticut Avenue showcased a few new favorite offerings for its Spring menu.  But none has tempted our taste buds like the Surf and Turf Burger.
It’s an 8oz. Wagyu Patty topped with Gruyere Cheese, Butter Lettuce, Tomato Sliced, Pickled & Grilled Red Onion Slice & Truffle Lobster Salad on a Butter Toasted Brioche Bun.  We recommend it paired with fries and a glass of Dancing Hares Mad Matter, Cabernet 2013, Napa.
Happy 4th, Foodies!

Previous Post: Near White House, a New Sushi Market
Next Post: Take Note: ‘Off the Record’ is Literally Popping UP for the Summer