South Florida native turned DC local, Brittany Singer is a digitally savvy PR professional with a passion for tech trends, international travel, and the performing arts. Over the past five years, Brittany has had the honor of watching the District's stunning physical and cultural transformation and enjoys covering new hot spots, live events, and exploring everything DC has to offer. You can find her on Instagram and Twitter @BrittanyLSinger.

Some of the biggest names in Hollywood lined the red carpet Tuesday night at the Newseum as Netflix celebrated the premiere of its first original series, “House of Cards.” 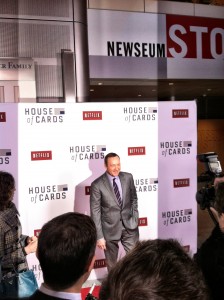 Perhaps even more newsworthy… “House of Cards” marks a major move forward by a subscription based streaming service to produce original content.

Netflix reportedly paid around $100 million to land the project and its success could influence the television industry for years to come.

“It seems that this is an opportunity for the film and television industry to learn the lesson that the music industry didn’t learn,” explained Spacey. “Give the audience what they want, when they want it at a reasonable price, in the form they want it in, and they’ll buy it, they won’t steal it.”

The entire 13-episode first season of “House of Cards” is available on Netflix this Friday, February 1.

One thought on “Newsworthy Netflix: Red Carpet Premiere of “House of Cards””