Starting April 26th, you can feel what it’s like to travel in space! 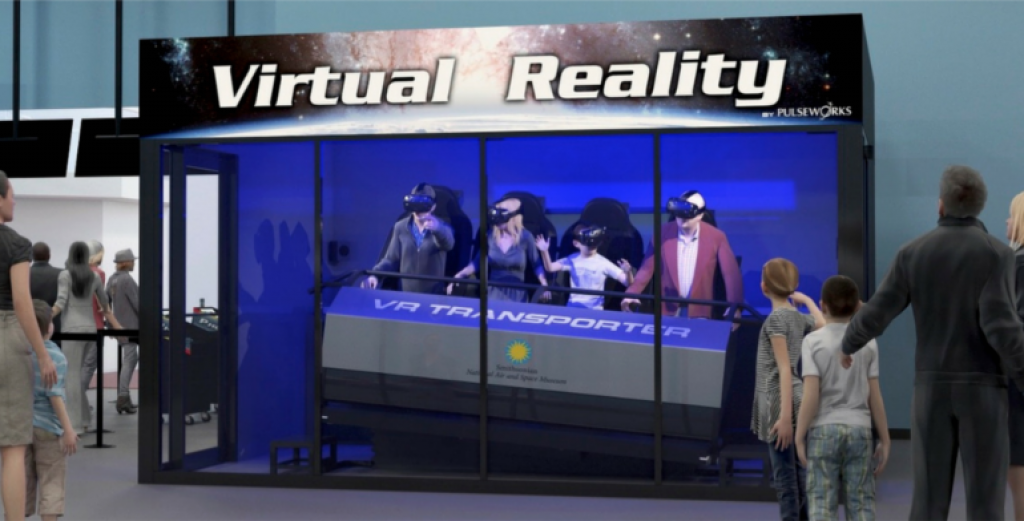 A new and exciting ticketed attraction at the Smithsonian National Air & Space Museum, “Spacewalk: Danger in Orbit,” will allow patrons to take on the role of astronaut while testing a new manned-maneuvering unit as they explore the elaborate exterior of the International Space Station high above Earth.
It’s like VR… but on another level.  The VR Transporter mimics the immersive visuals of the real world, Pulseworks motion and effects technology reconfirms what wearers are seeing by providing input to their other senses. Dynamic motion provides important cues to the brain that they are really traveling, and stunning surround-sound audio and gripping 4-D effects heighten feelings of realism.
Up to four people can be accommodated per ride cycle. The motion platform elevates, pitches and rolls in computer-controlled increments designed to mimic the path of the would-be astronauts as they float in space on their extravehicular journey from the cargo bay of the Space Shuttle Discovery to the International Space Station.
The effect of the VR Transporter is so powerful that many guests will try to reach out and touch objects as they pass by. It is this intuitive reaction that makes the platform such an obvious tool for learning and adventure at the National Air and Space Museum, where many come to ponder dreams of flight, space and adventure.
Tickets for the VR Transporter ride may be purchased at the museum’s simulator gallery located on the first floor, adjacent to the “America by Air” exhibition. Tickets are also available at the IMAX Theater and Planetarium box offices.