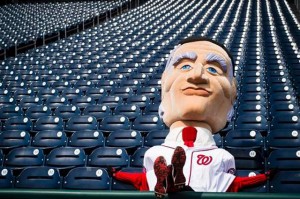 Friday night the National will debut yet another Racing President to join the Nat Pack.  Silent Cal — Calvin Coolidge — will, on the eve of his 143rd birthday, try to beat his Oval Office compatriots for the first time in a dash around the bases.

Coolidge has the distinction of being the last President to throw out the first pitch during a Washington World Series game.

The addition is exciting for fans who like Coolidge and want teachable moments for their children about history and politics… and maybe because Taft was getting tired of being the only President who loses and isn’t on Mount Rushmore: