Yes, it’s the Wine & Food Festival, but kicking back on the pier with a cold beer in the Stella Artois lounge sure makes buying that VIP ticket worthwhile.  Something to remember for next year!

Food Festival — taking place all day Saturday and Sunday in tents filled with temptations… of the bites and beverages sort.

More than just a tasting, the Festival brought together award winning celebrity chefs, artisanal craftsmen, culinary pioneers, smooth jazz, family fun, and, of course, wine from around the world.  This year’s festival included over 150 International wines, spirits and beers featured along with local and regional favorites. Guests sampled all of the varieties (and could purchase them by the glass and the bottle on-site at steep event discount). 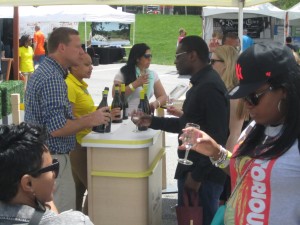 Stay tuned for another change to wine down at Great Tastes of Tysons coming May 31st and June 1st.