Paradise, Found — and on display at the National Geographic Museum.

Opening Thursday, “Birds of Paradise: Amazing Avian Evolution” is an interactive exhibit with some never-before-seen info brought to DC by two NatGeo grantees, 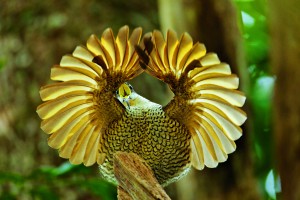 Over a period of 8 years, the duo documented 39 dramatically beautiful birds (basically allvariations on the crow) living in Paradise, or more specifically, New Guinea and Northern Australia. 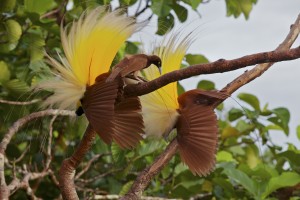 Known for their unique looks and mating rituals, the birds-of-paradise are actually a prime example of sexual selection — not the otherwise understood, natural selection — and thus, are an elegant example of extreme evolution on Earth.  With no predators and plenty to eat, it’s simply mating attraction that has caused these birds to look, sound and move as they do.  And it’s fascinating!

In this exhibit, you’ll be surrounded by the atmosphere of the forrest where Laman and 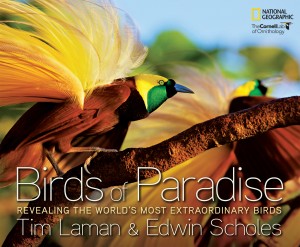 Scholes captured the sights and sounds of these bright and animated birds, and you’ll discover a handful of behaviors never before described or filmed.

Watch the mating rituals — and actually join in a stage of courtship — as you control every part of these creatures’ 18 million years of transformative evolution with interactive panels, table games, and video movement games like “Dance, Dance Evolution” (our personal favorite!)

From bizarre mating calls to branch hopping and Ballerina dancing… these birds are breathtaking!

*All photos provided courtesy of National Geographic, by Tim Laman