“There is a danger to expectation,” admitted Lily Cole, headliner at the UN Foundation‘s first event in its new headquarters just a block from the White House on Monday morning.  The nonprofit hosted the 26 year old actress/model/activist for a discussion on her Impossible.com social business community.

“At the same time, the only reason I’ve come this far in the path is that I believe in the idea.”

Impossible.com is a relatively new social giving network, website and app that encourage users to exchange services free of charge.  “The 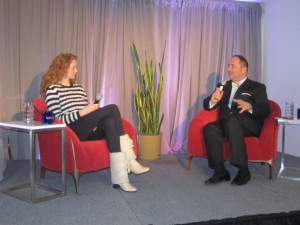 premise is to try and encourage a culture of giving,” Cole explained.  “It felt like such a simple idea… very obvious.”

Using the gift economy, much touted by Marcel Mauss, as a base concept, Cole, who has spoken at the World Economic Forum’s meeting in Davos (2013), Google’s Zeitgeist conference (2012) and Wired (2012), first began the idea as a thesis for her undergraduate degree before finding partners to help make it happen online.

Users post “wishes” — of the idealistic and also quite of the “Craigslist Wanted” kind — and say thanks when something is done for them.  In fact, that digital appreciation is the site’s only currency, bringing strangers together to achieve what Cole hopes will eventually create an “Impossible Utopian” community where Giving and Receiving aren’t even thought of as concepts anymore, but are just… well…. a given.