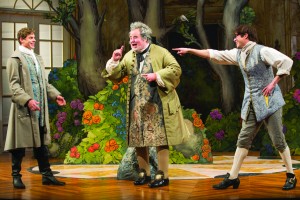 In all of my years attending shows of the Shakespeare Theatre Company, this is my very favorite, so please believe me when I implore you not to miss the world premiere of David Ives’s “The Metromaniacs” while it plays at the Lansburgh Theatre through March 8th.  There are scheming servants, characters in cognito, lots of tangled love plots, even more poetic wooing, and a farcical feel-good ending that’ll have you wanting even more of the mania!

Part of STC’s ReDiscovery series, which brings to the stage classic plays that have been somewhat… forgotten, The Metromaniacs is the third such masterpiece from David Ives (The Heir Apparent (2011) and The Liar (2010)).  After he “fiddled with” [Ives’s own words] Alexis Piron’s original work, STC ended up

with what is probably the french play’s first-ever English translation — and certainly the most entertaining!

“David doesn’t just translate these plays.  He brings them to life.  He makes us realize that history is not just something you read in a book, but something that you can actively shape, rediscover, and reimagine,” says STC’s Michael Kahn, who directed the production. 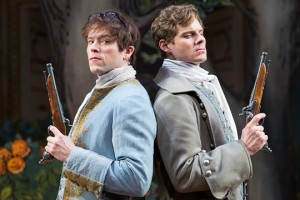 It’s a brilliant confusion of five plots — “none important” according to Ives — that all include mistaken identity, misdirected romance, and the fight for true love (of words!) that’ll have you untangling the who-thinks-who-is-who long into intermission… and smirking to yourself long after the curtain closes on the final bow.  It’s the jokes, their perfect timing, the contemporary quips, and lastly, the knowledge that this all actually was roughly based on a true story that makes you laugh, makes you think, and may make you want to buy tickets to another showing!!