Madame Tussauds, in concert with their children’s charity Merlin’s Magic Wand, brought the figures of global sensations One Direction to The 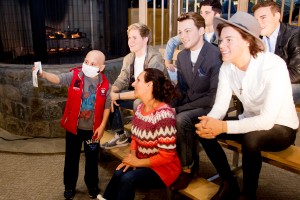 Children’s Inn at NIH last week to spread cheer to families who stay while seeking medical treatment at the National Institutes of Health.

The One Direction set features figures of Harry Styles, Louis Tomlinson, Niall Horan, and Liam Payne.  Despite Zayn’s recent departure from the group, his fans weren’t let down — he continues be featured alongside his former bandmates.

To celebrate their exciting arrival, Madame Tussauds brought the figures of the Made in the A.M. singers for an exclusive sneak peek at The Children’s Inn at NIH. The residents and their families, who live cost-free at The Inn while receiving medical treatment at the NIH Clinical Center, were invited to a private One Direction “meet and greet” before anyone else in the DC metro area. Additionally, attendees had a “hands-on” experience with studio artists from Madame Tussauds as they made wax casts of their own hands and learned about the meticulous and artistic process of making wax figures.

“It was an amazing experience to be able to bring One Direction to The Children’s Inn before we launched the figures at the attraction,” explained Therese Alvich, General Manager Madame Tussauds Washington, DC. “The band is so widely loved and it was exciting to see how much joy they brought the patients and their families.”

The band, who first found success on The X Factor (UK) in 2010, skyrocketed to global domination with hits including What Makes You Beautiful, Best Song Ever, and Story of My Life. They first met with Madame Tussauds studio artists in London to take the detailed measurements required to create their likenesses in wax in 2013. Each band member was examined, measured, and color-matched. It took a team of more than 40 people over four months and nearly four thousand hours in total to complete all the figures of the band.

In order to capture each of the boys’ unique personalities, Madame Tussauds consulted the band’s stylist when planning the attire of the figures. They are dressed in their signature smart-casual fashions that fans will recognize as drawing inspiration from previous appearances and performances. Harry is wearing his signature skinny pants, leather boots and an open, white button-down shirt. Liam is outfitted in casual jeans paired with a button down shirt under a leather jacket. Zayn sports a faded denim jacket and crisp white tee-shirt while Louis is dressed in dark denim pants, a blazer with a trendy pocket square, and leather shoes featuring his trademark missing socks. Finally, Niall sports high top Nike sneakers, jeans, and a white tee-shirt with a brown jacket.

One Direction will join the attraction’s line-up of music icons including Miley Cyrus, Justin Bieber, and Taylor Swift through May 19, 2016.

Previous Post: 9:30 Club Gets Its Own TV Show
Next Post: You’ll Want to Join In on This Sunday Supper Club