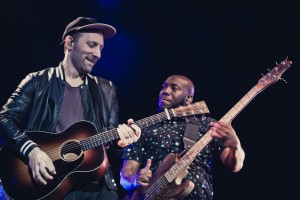 Popular singer-songwriter Mat Kearney (at left) arrived in Silver Spring on Saturday ready to perform for a sold-out crowd.  The concert, which was also a part of a livestream on Yahoo.com, was a three part affair, with Nashville youngsters Judah & the Lion first taking the stage.

With a stage full of musicians and equipment, the self-described “folk hop” band instantly impressed the eager crowd with a tremendous amount of energy and charm.  Their combination of foot-tapping banjo rifts with 90’s R&B covers like R. Kelly’s “Ignition,” was surprising, but executed seamlessly.

Up next was hometown favorite Parachute. Originally from Charlottesville, Virginia, the pop-rock group always feels right at home playing for DC area crowds. This comfort was clear as the group performed a series of old and new hits – complete with the catchy melodies and saxophone solos that characterize the band’s unique sound. The boys continued to entertain as frontman Will Anderson switched out his acoustic guitar for a piano, and the crowd sang along to the romantic lyrics of “Kiss Me Slowly” and “She Is Love.”

Finally, Mat Kearney made his way onto the Fillmore stage. With high spirits and an accompaniment of talented musicians, Kearney smoothly worked through his impressive repertoire. While performing his 2011 song “Runaway,” Kearney hopped off the stage and over the barricade, joined an understandably thrilled audience and quietly transitioned into a cover of U2’s “Where the Streets Have No Name.”  Upon returning to stage, Kearney ended the night with favorites “Just Kids” and “Ships in the Night.”

While the focus of the night could have easily been shifted to any number of moving pieces – including a Yahoo livestream and sold out show – Kearney, and his opening acts, brought the focus right back to where it should be: quality music.

Previous Post: An Interview with Leonardo da Vinci
Next Post: FilmFestDC Shows “I Can Quit Whenever I Want,” Says No Quits This Year