Now on at Arena Stage, a Tazewell Thompson world premiere — commissioned specifically for Arena Stage’s American President’s Project, an initiative to delve into the lives and legacies of US Presidents and their families — Mary T. & Lizzy K. 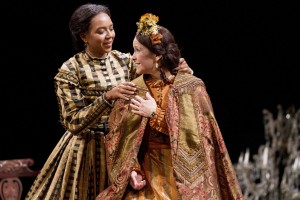 Few but historians have probably paid attention to the relationship between the 16th “Mrs. President” and her Dressmaker, Elizabeth “Lizzy” Keckly.  In the same vein as today’s hair dresser confidante, Mary (played by Naomi Jacobson) told all only to freed-slave-turned-artisan, Lizzy (Sameerah Luqmaan-Harris), bonding them as unlikely best friends… but as Lizzy’s hands worked overtime to create the masterpieces of her career, Mary’s grasp on reality slipped further away.

Throwing open the doors… and cleaning out the closets… of the White House, this play provides an insider’s look at a most unique friendship between two exceptionally strong-willed and ambitious women, 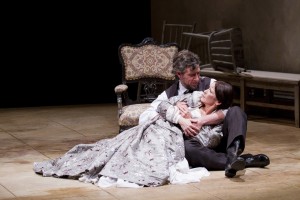 who both need each other, but don’t dare to admit it.

Sure, it’s a story about loss and love.  Frequent intrusions of Abe Lincoln (Thomas Adrian Simpson) show, a bit uncomfortably, what an unconditional love he had for “Mother” (as he called her), and Lizzy, though restrained, shows her anguish over her own lost love… and indeed everything that seems continually taken from her.  But it is promises — kept and broken — that really speak to the heart of the story.