Sure, there’s a story… but it’s really all about the songs.  Mamma Mia! — the tenth longest running show in Broadway history — is on stage now at the National Theatre.

It’s the story of an independent, single mother who owns a small hotel on an idyllic Greek island, Donna, who is coming to terms with the marriage

of Sophie, the spirited daughter she’s raised alone.  Donna has invited her two lifelong best girlfriends to the wedding — practical and no-nonsense Rosie and wealthy, multi-divorcee Tanya.  (Both were back-up singers for her once-upon-a-time during her rockstar days; they made up Donna and the Dynamos; and in this show, they provide the comic relief.)

But unbeknownst to Donna, Sophie has secretly invited three guests of her own.

She’s on a quest to find the identity of her father so he can walk her down the aisle, so she brings back three men from Donna’s past to solve the mystery, rekindle some romances… and maybe bloom some new ones.

You’ll laugh, you’ll cringe.  You’ll wonder how Sophie’s fiance Sky manages to get in his wetsuit without missing a beat of his song.  And you’ll 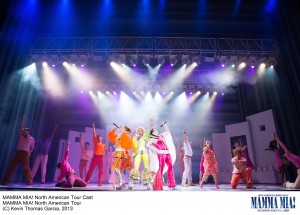 forgive the story for being majorly melodramatic… because dancing to those finale songs has you leaving the theatre with the most fabulous feeling.

Previous Post: Which is the BEST Coffee House in DC?
Next Post: Female Brewers Unite for Collaborative Brew Day