Travelers to Switzerland often enjoy a cold one at Einsiedler Brewery.  It’s a Swiss tradition, because you couldn’t get one anywhere else!

But now, a DC restaurant is the first in the world — outside of Switzerland — to carry the beloved 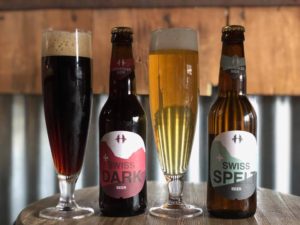 brand.  Stable (1324 H St. NE), the Capital City’s first Swiss-American restaurant, is adding two Einsiedler beers to their beverage list thanks to Stable’s Executive Chef, David Fritsche.  He grew up in Einsiedeln where the brewery is based, and thus has a lifelong connection to the iconic beer maker.

Stable’s aprés ski vibe and European menu pair perfectly with Einsiedler’s Swiss Dark (ALC 5.2%) and Swiss Spelt (ALC 4.5%.)  Co-owner Silvan Kraemer compares the Swiss Dark beer to an American black/dark Lager, but says the Spelt is “unlike anything you’ve ever had” here in the States.