The North American tour of the new stage adaptation of The Wizard of Oz will play the National Theatre for two weeks only, May 3 – 15, 2016.  And while the show’s on our local stage (and beyond!), a local girl will be playing the lead role.

Starring as Dorothy, Sarah Lasko is a University of Maryland and Rockville High School graduate, who most recently appeared locally at Imagination Stage, where she originated the role of Lisa in Double Trouble (the musical adaptation of The Parent Trap). She has also appeared locally at the Kennedy Center as a soloist in “An Evening with Barbara Cook” and in “NSO Christmas Pops with Marvin Hamlisch,” as 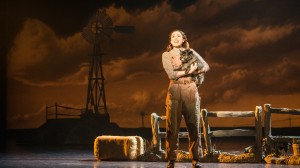 well as at Keegan Theatre in Cabaret.  She joins the talented cast of The Wizard of Oz  for a new production that is an enchanting adaptation of the all-time classic.

Developed from the ever popular MGM screenplay, the production contains the beloved Harold Arlen and E.Y. Harburg songs from the Oscar®-winning movie score, all of the favorite characters and iconic moments, plus a few surprises along the way, including new songs.

So click your heels together and join Scarecrow, Tin Man, Lion, Dorothy and her little dog Toto, as they journey through the magical land of Oz to meet the Wizard and obtain their hearts’ desires. Watch out for the Wicked Witch of the West and her winged monkeys as you rediscover the real story of Oz in this fantastic musical treat for the whole family, starring our very own local you’re sure to love.