The model didn’t walk down the red carpet, she walked down in the carpet at the Thursday’s annual Cosmo Couture fashion show at the Artisphere Thursday night. 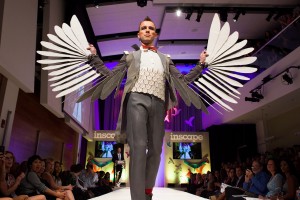 And carpet might not have even been the most creative construction.  Cosmo Couture is best known for its material mix — showcasing styles from carpets and chair backs to parquet flooring and roofing tiles.

For the 4th annual event, over 800 people cheered as 25 design firms competed for four fashionable prizes… with all this creative competition going toward a good cause. Cosmo Couture annually gives 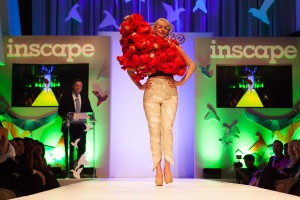 more than $20,000 to My Sister’s Place, an emergency shelter for the abused.

Despite breathtakingly bold pieces sauntering down the runway all night, Cosmo Couture’s rowdy crowd fell silent only twice: upon meeting a survivor of domestic violence who made a personal appearance and on-stage plea for awareness and prevention, and then, at the 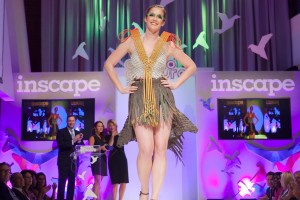 announcement of the audience favorite (voted by tweets).  The carpet ballgown from KGD snagged that one!

This year’s competitive show was inspired by birds of the National Zoo, pairing industrial fabricators with interior design team to create awesome fashion out of architectural items.

Missed the show?  You can still see the entries up close at the Corcoran, November 20 through December 7.

Previous Post: Celebrity Street Artists Present Heineken Murals All Over Town
Next Post: Inside the Fab Empire Launch of the CBC “Insider’s Guide”