Kathleen Turner is in a show at Arena Stage.  Yes, that Kathleen Turner.  Famed of Body Heat and Romancing the Stone.  We probably don’t 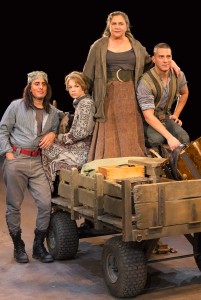 need to write much else to get you going to see it, but just in case…

Theatre in the round isn’t very forgiving, and neither is tough as nails matriarch Mother Courage (Turner), though she isn’t ashamed to profit off the very war that takes her children from her.   She’s a single mother, determined to keep her family alive and her business afloat during war.  But — don’t think this tale of courage, drive, and conviction during conflict is anything short of anti-war.  There’s satire from the start.

they’ve ever known about this show,” said Arena Stage’s Molly Smith.  “To stage [it] with Kathleen Turner and this host of artists is a galvanizing experience.”

Turner, an icon of stage and screen makes her singing debut in this play with more than 10 pieces of original music composed in a rollicking, gypsy-punk style and performed by cast members doubling as musicians.