In 2012, the Embassy of Italy launched its Digital Diplomacy Series— Tweet-worthy panel discussions on a range of topics with the goal of “[building] and [nurturing] a dialogue with our citizens and our audiences here in the United States.”

This year, as the country sits on the United Nations Security Council as a non-permanent member and hosts the G7 Summit in Sicily this May, the Embassy is focusing its series on foreign affairs, and kicked off last Monday with a discussion on “The News, the Internet and Foreign Policy.”

Whereas traditionally the government was the primary source of news gathering, that’s no longer necessarily the case, suggested Mr. Klapper. And Twitter is a good way to develop connections and corroborate information in places where there are not many US journalists 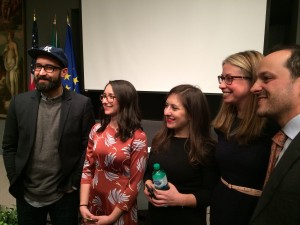 on the ground, noted Ms. Schulberg.

And of course, it’s faster. Case in point: An audience member asked the panel why no one had covered a particular story on Cuba.

Send it to me, said Mr. Klapper, and I’ll take a look.

“I already Tweeted it to you,” she said.

Previous Post: DC Gets First Look, Play at the New Nintendo Switch
Next Post: A Small Ensemble Delivers Big with “Peter and the Starcatcher” at Source