On some private industrial acreage in rural Virginia near Colonial Williamsburg, history buffs and tourists who enjoy the obscure can get up close and personal with some of the most unique, coolest — and perhaps creepiest — busts of America’s Presidents.

These presidential heads were originally part of a nearby historic attraction called Presidents’ Park, which went defunct in 2010. Intended to be sent to the stone crusher, they were instead purchased and placed on private property.

There are 42 twenty-foot-tall presidential busts (and a miniature artist’s proof of Obama, the President who was next to be added to the park when it went out of business). Every president from George Washington to George Bush is on display… and slowly decaying. 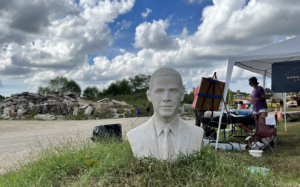 The holes in each presidential bust’s head were the result of the move to get them to the field in Croaker, VA. The additional large hole on the back of Lincoln’s head was NOT intentional, however; it was caused when he fell in transit.

The busts are the first of a series of three sets of presidential heads created by sculptor David Atickes. Another set can be found — also languishing on private property — in South Dakota, and the third is in an unused art studio in Houston.

Lucky visitors to the Williamsburg area — possible on a daytrip from DC — can see the Presidents when the field is opened to ticketed guests about eight times a year. A link to the eventbrite for future dates can be found here.

Previous Post: Historic Car Rally — and Rare Time Trial — Coming to Loudoun in October
Next Post: GET ON THIS BOAT: Potomac Cruising with Reflections DC