In a culinary showdown where Embassy chefs showcase the unique flavors of their home countries to win the coveted People’s Choice Award (presented by Events DC, chosen by guests’ votes), as well as the Judges’ Choice (presented by TCMA, selected by a panel), the Embassy of the Philippines Chef took top honors in both categories. 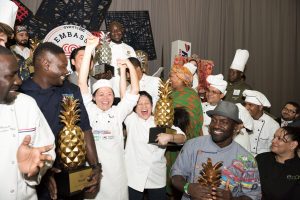 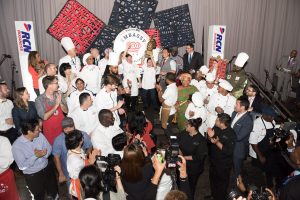 Among those in attendance to travel the world with their taste buds, sampling bites and beverages from 28 participating nations were Busboys & Poets’ Andy Shallal, CBS News’ Major Garrett & Arden Farhi, The List Are You On It’s Nycci Nellis, The Washington Post’s Maura Judkis, and The Wall Street Journal’s Daniel Nasaw.

New this year, two new awards were presented.  The Best Beverage presented by Pepsi was

awarded to the Embassy of Barbados for their Drunken Bajan Lemonade developed by mixologist Philip Antoine and Chef Creig Greenidge. The Best Dressed Embassy presented by Macy’s was earned by the Embassy of the Kingdom of Morocco with a colorful display.