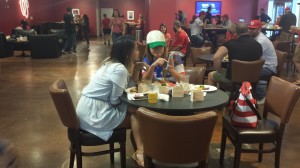 There’s almost nothing that can top a cold brew at a baseball game… unless it’s paired with a smorgasbord of sliders!

Anheuser-Busch held a pre-game party — dubbed the Centerfield Social — at Nationals Park before theWashington Nationals vs. Cleveland Indians game earlier this month.  A last hurrah to celebrate summer, the event focused on beer pairings with five different varieties of sliders… where the protein shone each time, whether it was salmon, pork, chicken, beef, or even vegetarian! 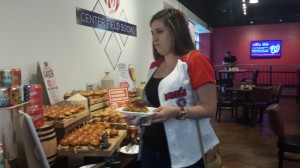 Obviously the sliders elevated the beer drinking experience, as Goose Island IPA complemented the sweetness in the Asian Pork Burger Slider; Stella Artois brightened up the Salmon Burger; Shock Top Belgian White helped balance the spicy flavor of the Southwestern Chicken Burger Slider;  Blue Point Brewing Company Toasted Lager highlighted the earthy and spicy flavors of the Veggie Burger; though the Budweiser and Tavern Burger Slider resulted in a tamer combination than the other beer pairings. 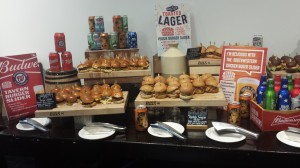 While relaxing, noshing, and comparing slider notes — guests enjoyed tunes from The Bubbas, including covers of Dusty Springfield’s “Son of a Preacher Man,” Walk the Moon’s “Shut Up and Dance,” Taylor Swift’s “Blank Space,” and Cheap Trick’s “I Want You to Want Me.”

The Social was a fine prelude to the game itself, because obviously America’s favorite pastime goes best with good people and great pours.

Previous Post: All About Last Weekend’s Magical All White Picnic at the Lincoln Memorial
Next Post: Score FREE Entry to The National Museum of Women in the Arts