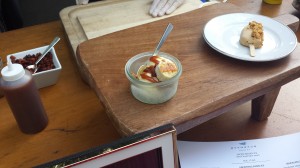 They’re calling it a “Heat Dome” — but whatever that means, it’s clear the weather has been blazing hot in DC.  One of the best ways to cool down is by eating some flavorful ice cream or other frozen treat.  You could just go grab a cone, but check out this way to elevate a cool culinary experience.

The Blue Duck Tavern, located adjacent to the Park Hyatt in West End, has a multitude of ways to serve the frozen treat — whether in the form of ice cream bars, ice cream sandwiches, or even an ice 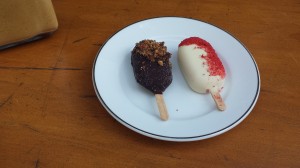 cream sundae!  The desserts are the craftwork of Blue Duck Tavern pastry chef David Collier, who has been working at the eatery since last October.

Collier makes sophisticated and playful twists on frozen desserts. For example, his Strawberry Rhubarb ice cream bar is an explosion of strawberry flavor, partly due to the inclusion of freeze 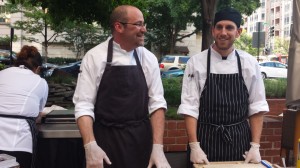 dried strawberries, but its rhubarb center helped balance the powerful strawberry taste. In The Elvis Sundae, he included bacon bits and — instead of disposing of the bacon fat — he used it in the caramel for that sundae, which added a smoky flavor and made it stand out next to the dessert’s delicate peanut butter ice cream.

For those who were feeling less adventurous, a Classic ice cream sandwich or Cinnamon 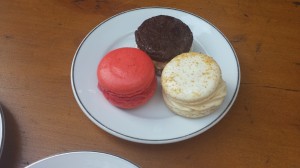 Oatmeal ice cream bar are good options, especially because both of them have a strong chocolate flavor.  And did we mention the ice cream filled macaroons?!

So many reasons why we all scream for ice cream.