The chefs gathered for friendly competition to promote heritage breed pigs and global grilling cultures around the world.  The competition challenged them to cook one whole 180 pound family farm-raised heritage pig by creating six dishes to share with their BBQ loving 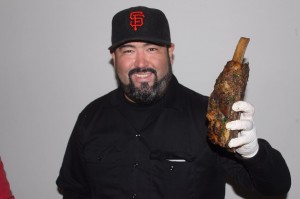 Before reading any further it may help to know just what makes heritage pork so special?  French Master Butcher Marc Pauvert of the Four Seasons in Baltimore would tell you, “Heritage pigs is [sic] where pork flavors come together, the meat melts in your mouth, and the flavor comes from the fat.”

This is a style of pork that many attendees were unfamiliar with… since most typically eat pork that comes from farms that breed low fat pigs.  But Heritage BBQ by Cochon 555 is dedicated to supporting a new direction for heritage breed pigs by expanding the knowledge of these pigs in the food industry as a more flavorful and tender option. 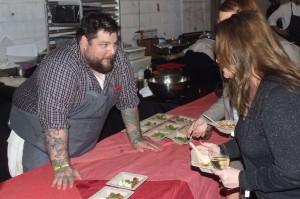 In the end, Chef Jose Adorno was announced the King of BBQ at Heritage BBQ.  His delish dish… a Red Wattle pig from Creekside Farms.