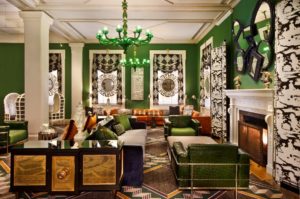 Get in the habit of heading to the Hotel Monaco (home to Dirty Habit) on Tuesdays.

“Green Room at the Hotel Monaco” — a free weekly musical performance with up-and-coming local artists — is starting this Tuesday (8/13/19) from 5-8pm.

While the series is inspired by the boutique hotel’s green lobby-lounge, a Green Room is also the name of the room musicians prep in before a show.

Inaugurating the weekly series will be Eliott Seppa and Friends. No tickets required.

Previous Post: Did My Dog Love the St. Gregory Hotel Washington DC More Than I Did?
Next Post: DC VegFest Draws Largest Crowds to Date at Nationals Park