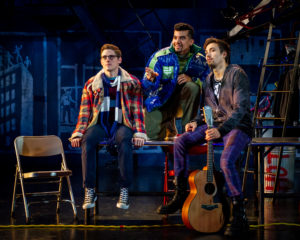 For many in Generation X/Y, RENT was the first musical they went to see. It was loud and unapologetic and spoke about the issues facing so many at the time.  So if young audiences attending RENT’s 20th anniversary tour at the National Theatre this week are any indication, the story may have shifted a bit, but rebellion retains an enduring allure.

Don’t get me wrong; it’s still the same RENT you know and love.  RENT follows a year in the lives of seven friends/creatives as they struggle with the hardship of living in NYC at the end of the 20th century. Those that have seen it will remember its focus on homelessness, addiction and AIDS.  And it still does.  But it has also seems to have morphed into an overarching story about life struggles and timeless worries. 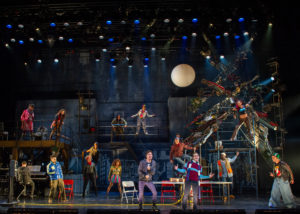 It’s true that the story didn’t gel as much for me this time around — perhaps it was the chemistry between with these actors, or perhaps nothing can quite live up to your first RENT experience — but the music makes up for it, especially the female singers on this tour.  In particular, Aiyana Smash‘s Mimi Marquez is phenomenal… and I don’t think anybody would turn down a little more of Rayla Garske singing her Seasons of Love solo. 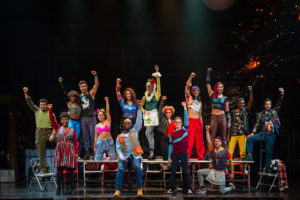 It’s now a theatre classic, but today’s audiences still appreciate RENT for its defiance, rebellion and ode to creativity above all. And this 20th anniversary tour of RENT is only showing at the National Theatre for one week, so grab those seats to delight in RENT’s memorable music, and sing along to popular songs like One Song, Glory and No Day But Today while you can!

RENT plays at National Theatre through November 17th. It runs 2 hours and 20 minutes with one intermission.

Previous Post: About That New BBQ Pavilion at The Children’s Inn at NIH
Next Post: This Chef Says its OK to Reprise the ‘First Thanksgiving’ with a Complete Native-Made Meal To-Go