In Studio Theater’s U.S. world premiere of White Pearl, Thai-Australian playwright Anchuli Felicia King has written a black comedy about selling whiteness, and the dark underbelly of the beauty industry.

Sharply witty and bleakly unflinching, the play follows the all female executive team of Asian cosmetics startup Clearday as they scramble to contain the fallout from a draft racist ad for skin whitening cream that leaks on YouTube and quickly goes viral. From a company on the rise to one spiraling down a vortex of mounting YouTube outrage, Clearday’s  team hustles to contain the damage before the U.S. Market opens or Buzzfeed weighs in. Add to the mix the tensions, ethnic misunderstandings, and outright prejudices among the various Asian nationalities, and someone’s definitely getting fired. 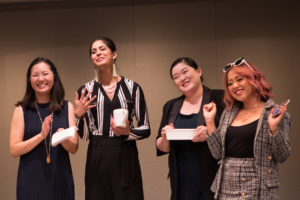 how the crisis arose, and how it plays out.  The complicated relationship between Thai-American Built Suttikul (Diana Huey), and her French stalker ex-lover Marcel Benoit (Zachary Fall) set the crisis in motion. Cosmopolitan Mumbai-born founder Priya (Shanta Parasuraman), hipster Singaporean press aid Sunny (Jody Doo), and Japanese dogsbody Ruki (Resa Mishina) operate primarily at one level throughout. It is the friendship and cultural affinity between Korean biochemist Soo-Jin (Narea Kang), and Chinese Xiao (Jenna Zhu), the daughter of a disgraced Chinese official who would face a hostile return home if she loses her work permit, that directs the play’s…er…non-resolution. 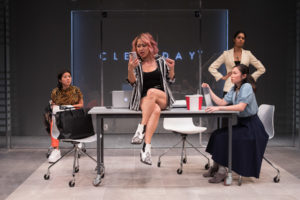 Director Desdemona Chiang paces White Pearl at lightening download speed, and set designer Debra Booth’s sleek and chic Singapore headquarters is a clean foil to the messy dealings within, and screen for Rasean Davonte Johnson’s digital projections. With her costumes, designer Helen Huang has adorned each character with their status as well as clothes.

This fast-paced, biting comedy wades boldly into toxic corporate culture, greed, racism, and shame as both a cultural commodity and canny marketing strategy. Whatever your sensibilities about the ad or the characters, you’re left with no doubt: The beauty industry can be pretty ugly.

Previous Post: Caps’ Tom Wilson Among First to Shop Indochino’s New Showroom in Georgetown
Next Post: Grab Your Seats: ‘Latin History For Morons’ is a Class You Don’t Want to Miss