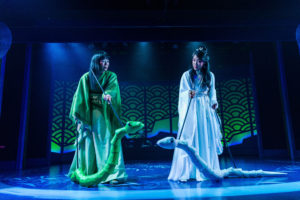 Constellation Theatre Company‘s The White Snake is a marvelous adaptation of one of China’s oldest and most beloved legends.

Two snake spirits seeking Tao’s enlightenment on a faraway mountaintop are distracted by the human world below.  At the pleading of the Green Snake, the more enlightened White Snake spirit agrees to join her in assuming mortal form to visit the town of Hangzhou.  But what is meant to be a simple, quick visit becomes life changing for the both of them… and the unsuspecting pharmacist’s assistant they encounter.

White Snake falls in love with the humble Xiu Xian; they marry and start a family. But a monk, Fa Hai, knows White Snake’s true identity, and he vows to destroy their unnatural union.

What a fascinating tale!  And all of this action happens to the soundtrack of world-renowned musician Tom Teasley‘s mesmerizing original percussive score — live on stage! — alongside Chao Tian playing the Chinese dulcimer. 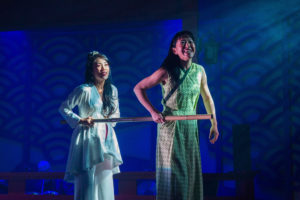 Staging is simple, yet with the slide of a screen, the audience is taken from on high to Hangzhou in an instant, laughing along jovially with the antics and comic relief of Green Snake (Momo Nakamura) and joining in on White Snake (Eunice Bae)’s emotional rollercoaster. 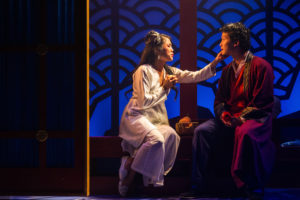 The White Snake is a story of love, loyalty, and honesty.  It’s also a true evening of entertainment. And you won’t want to miss many of these actors making their Constellation debut in the legend’s 100 marvelous minutes (with no intermission).