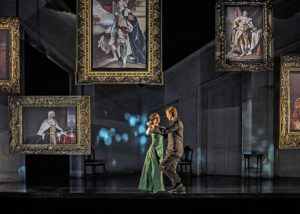 If you love history and humanity, story-telling — and simply seeing the good guy win for a change — then hurry to the D.C. debut of David Seidler’s original play The King’s Speech – which inspired the 2010 Oscar-winning film by the same name – during its short, four-day run at The National Theatre before it’s gone… like Meghan Markle and Prince Harry from Buckingham Palace.

In an inspiring true story (ringing very timely among today’s headlines), King George VI (Bertie) is thrust onto the world stage after the abdication of his older brother, Edward. Shy, fragile, and afflicted with a profound stammer, Bertie is ill-equipped to lead a nation on the brink of World War II. When traditional medical interventions fail, Bertie’s wife Elizabeth (the Queen Mum to you and me!) convinces her husband to seek help from an unconventional Harley Street speech therapist, Lionel Logue. Their success or failure as therapist and patient and as unexpected friends will seal their destiny, the destiny of England, and perhaps the world, in this compelling true story. 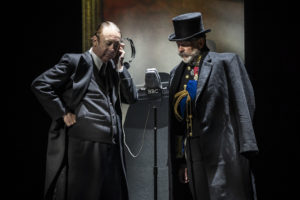 Directed by Michael Wilson, the story is both tremendous and simple – the fate of nations and the friendship between two searching souls, where a monarch and a common colonist become simply human, and quite possibly change the direction of history for the better as a result. The understated performance of Nick Westrate as the stuttering royal has a strong steady build through his torment of duty, dread, and determination. By delivery of the ultimate speech in question, you are riveted, earnestly pulling for the good man to triumph. Michael Bakkensen charms as Lionel Logue, the eccentric Australian speech therapist. Maggie Lacey as Princess Elizabeth and Elizabeth Ledo as Lionel’s wife Myrtle employ their limited stage time to showcase the strength of the women behind the men. Kevin Gudahl stands out as a convincing and comic Winston Churchill.

The King’s Speech is an uplifting treatise on the human spirit. Treat yourself and someone you love this Valentine’s Day! Forget poetry, give them The King’s Speech at the National Theater.

Previous Post: Grab Your Seats: ’39 Steps’ is a Joyful Hitchcockian Frolic
Next Post: Museum of the Dog Pop-Up for President’s Day Wknd, Plus New Pooch Package at the Watergate