Antionette Nwandu’s Pass Over at Studio Theater is not an easy play to watch, but good theater can often be about that which is not easy. Directed by Psalmayene 24, Pass Over is a mash-up of Waiting for Godot, the Bible Book of Exodus, and today’s tragic Chicago Tribune headlines, often expressed in a vernacular that is unfamiliar – and uncomfortable – to the typical Washingtonian theater attendee.

Marooned on a gritty street corner island, Kitch and Moses (powerfully performed by Jalen Gilbert and Christopher Lovell respectively) are a dispossessed team, like Vladimir and Estragon from Samuel Beckett’s absurdist tragicomedy Godot, stuck in an existential cycle of waiting and hopelessness they try to master with gallows humor and jags of deluded optimism. 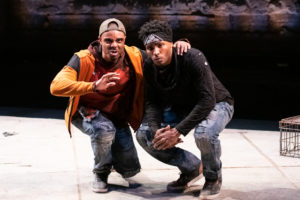 While the attitude is “it don’t matter,” the way they leap at scarce crumbs or cower when a truck backfires exposes their bravado for tamped down dread. They joke, dream, and throw down about the promised land to which they will “pass over” just as soon as they get up off the block – an oft-rehashed top ten list of soft sheets, clean socks, and resurrected loved ones. Is today the day they’ll pass over? Or is today the day the Po Po will finally hunt them down? Their foil is the white man (played with almost cartoonish Leave It To Beaver perfection by Cary Donaldson), who in various guises boards and leaves their island with unhampered freedom and dominance. 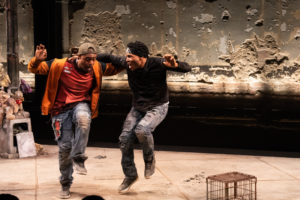 Under Psalmayene 24’s direction, Gilbert and Lovell physicalize the script into a heightened performance style, like a dance, or as one reviewer dubbed it, a “choreopoem.” Debra Booth’s grimy street corner set evokes a forsaken island, the helm adorned with familiar earmarks of tragedy.  Time passes yet remains the same under Keith Parham’s lighting. Brandee Mathies contrasts the ‘street’ of Moses and Kitch’s hoodies and shredded jeans with the white ‘suits’ born of plantation, power, and privilege.

Edgy and humorous, farcical and chilling, Pass Over probes the forces that have marooned young black men from the 1800s plantation to the ghetto today, and the power and limitations of their personal resilience. The intense experience ends without a tidy curtain call, releasing an uncomfortable audience into the streets without the solace of relegating Nwandu’s searing examination of race and police brutality strictly to the theater behind them. 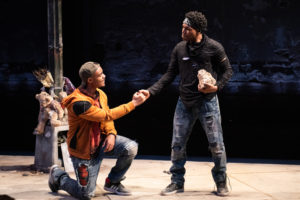 COVID19 NOTE: Studio theater is prioritizing the health and safety of artists and patrons during these uncertain times. They are increasing the frequency of their cleaning service, disinfecting high touch areas, and disinfecting theater seats after every performance. If you are not feeling well or experiencing flu-like symptoms, they encourage you to stay home and contact the Box Office to reschedule your tickets. Through the run of Pass Over, Studio will relax its exchange procedure by eliminating exchange fees and will work with you to find a suitable alternative in available seating through April 12.

UPDATE: Studio Theatre has made the difficult decision to suspend its production of Antoinette Nwandu’s extraordinary play Pass Over effective Tuesday, March 17. Given the evolving nature of COVID-19 and its impact in the Washington, DC region, Studio’s leadership felt this was the most responsible course of action to protect the health of patrons, artists, and staff, and support citywide efforts to contain the spread of the virus.