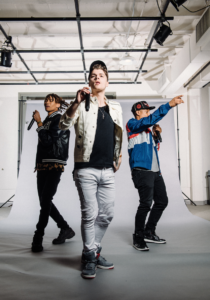 Written and directed by Tearrance Arvelle Chisholm, Studio Theater’s production of P.Y.G., or the Mis-Edumacation of Dorian Belle at Studio Theater is a boisterous, anarchic, and quirky look at race in America through the filter of music and the lens of the lens. What you get is George Bernard Shaw’s 1913 play Pygmalian reborn as Justin Bieber-meets-Outkast, in a meta format where the stage becomes both the backstage and broadcast of a music television reality show.

Simon Kiser’s Dorian is as earnest as he is naïve, convinced a bandaid can fix a hundreds year old bullet wound. With hip-hop aspirations, he’s hired two known-but-not-quite-made-it Chicago rappers to educate him and increase his street cred, all taped for TV audiences. Big surprise, discussions about race ensue.

Blacky (Seth Hill) and Alexand (Gary L. Perkins III) increasingly wrestle with their black identity. They mock youthful Dorian’s stereotypical whiteness, but ultimately question what elements of their “blackness” were adopted by prescription. Each grapples with their Faustian pact for money and exposure, but must ponder the definition of black musical integrity for a couple of “hardened thugs” from gated suburban communities? What legitimate collective conscience spontaneously arises from slavery and skin tone? What happens if they accidentally become fond of their ingénue roommate? Or the skiing and arugula that go with fame and money?

Point of focus pivots between live action and ample, clever use of taped and real time video confessionals. Scenic Designer Richard Ouellette has created a versatile and striking set. Projections by Kelly Colburn, and lighting, along with clever use of blackouts, by Jesse Belsky, further the verisimilitude of reality TV. Danielle Preston obviously had fun designing the costumes of clashing music worlds.

The play bubbles along with pop-a-minute dialogue as contemporary cultural references fly, which may leave some non-millennials scratching their heads. P.Y.G.is alternately funny, schizophrenic, thoughtful, and smart. Chisolm has evolved as a writer, and the noisy pace of his script does not overshadow the polish of his inquest into the social issues that divide blacks and whites in America (and Canada), proving that not all reality TV is trash. Tune in.