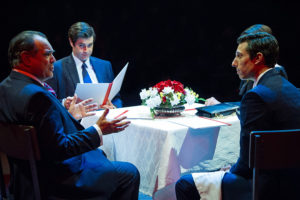 If Gordon Gecko took up playwriting in prison, Junk is the play he would pen (in the pen). Directed with a tireless foot on the accelerator by Jackie Maxwell, Pulitzer Prize winner Ayad Akhtar’s (Disgraced) rapid-fire script offers an unflinching post mortem on the origins of debt financing in the 1980s and the finance sector’s inevitable slide into “Greed is Good” mentality. Junk is abashed and shameless, thrilling and troubling, disgusting and illuminating – an excessive play about excess.

principled CEO Thomas Everson Jr.’s(Edward Gero) storied family manufacturing business. Interested only in reaching the big leagues of companies listed on the stock exchange, Merkin crosses any line to get what he wants, manipulating friend, foe, and finance. Inspired by the volatile and cut-throat financial world and the junk bond giants of the 1980s, Junk offers an enticing look at the money makers, their hubris, and those who tried to hold them accountable, and asks: Is redemption truly possible or is there always a new scheme waiting in the wings? 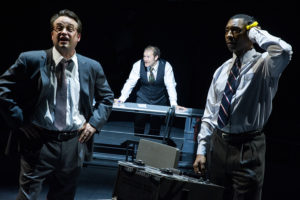 The performers all deliver. It’s a large cast of 17 actors and 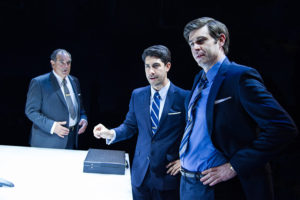 more characters, but few are caricatures. While you don’t actually come to care about any of them, each brings a human element to the power play. Amiable Merkin is a family man who believes he’s “saving America.” Taut journalist Judy Chen (Nancy Sun) is idealistic yet susceptible. Moral white night private equity expert Leo Tresler (David Andrew Macdonald) is an entitled predator. U.S. Attorney with mayoral aspirations Giuseppe Addesso (Nicholas Baroudi) is guided more by political ambition than righteousness. Refreshingly, Junk has multiple strong female characters, highlighted as such, at a time when women mostly took a backseat. Shanara Gabrielle is a particular stand out as Merkin’s keen, clever wife. 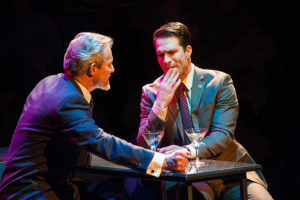 Junk doesn’t dumb down the finance, yet makes it accessible. It’s tightly plotted and, despite running an uninterrupted two hours, the tempo is rapid and engaging. Strap on your seat beats for the impact you know looms ahead and enjoy Akhtar’s ‘crash course’ on the rise of the junk bond. It’s a wild ride.