If you walk by Arena Stage at the Mead Center for American Theater this month between 8-10PM you might feel your soul elevate if the stirring harmony of the Fisk Jubilee Singers leaks through the doors of Kreeger Theater into the night. World-premiere musical Jubilee, written and directed by Arena Stage favorite Tazewell Thompson, is a celebration of heritage, endurance, survival, and most of all, song.

In an Our Town-meets-gospel-revival format, Thompson tells the extraordinary story of the world-renowned Fisk Jubilee Singers. Forged by the irons of slavery, risen from the ashes of the Civil War, and born in 1871 on the Nashville campus of ground-breaking Historic Black College Fisk University, the Jubilee singers broke the mold in every way. The bold a cappella African American ensemble shattered racial barriers in the U.S. and abroad, traveling around the world and singing before the Queen of England to raise money in support of a school created to educate (gasp) exclusively black students – all this only six years after the end of Civil War and the Emancipation Proclamation. 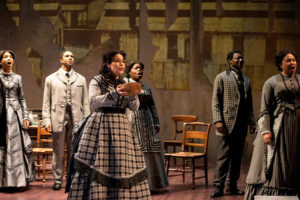 Donald Eastman’s set is simple: weathered and peeling walls evoke the reconstruction era, a collection of spindle-leg wooden chairs the stage’s only adornment. Shawn Duam’s projections transform the rustic walls to transport the cast around the world and through time. Rich against the austere backdrop are Merrily Murray-Walsh’s lush, gorgeous costumes. Her exclusive use of black, white, and gray make you feel as if you could be watching documentary film footage from the era portrayed.

But it’s the singing that matters. This well-paired, evenly talented cast of thirteen can sing. They blend their rich voices together in a score laden with more than three dozen spirituals and hymns including “Wade in the Water,” “Ain’t That Good News,” “Swing Low, Sweet Chariot” and “Nobody Knows the Trouble I’ve Seen.” Thompson opted for less talk, more melody, and it’s a winning recipe. You eventually get a thumbnail portrait of each student from backstory to end story. But it’s the music that tells the tales of suffering, racism, oppression, pride, endurance, grace, and joy. The Fisk singers didn’t pander to racial 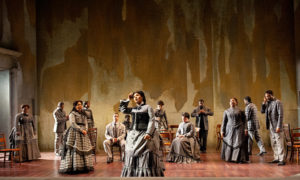 stereotypes or perform sacred classics. They sang the ‘hand-me-down’ songs of their people with pride. Unflinching and uplifting, Jubilee is a musical celebration of the Jubilee singers’ tenacity, and legacy that the spirituals of the oppressed did not fade into obscurity but retain a permanent imprint on American music culture.

Jubilee is playing at Arena Stage Kreeger Theater at the Mead Center for American Theater from through June 9, 2019  (1101 Sixth St. SW, Washington DC 20024). Running time: two hours and 25 minutes with one 15 minute intermission. For information or tickets call 202-488-3300 or click here.

Previous Post: From our ‘Tree Pose’ at the 14th Annual Yoga on the Mall
Next Post: Introducing Summit the Rooftop at the Conrad Hotel