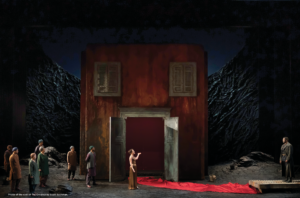 Much like how it couldn’t have been easy to condense this epic trilogy into a single night and single cast, it won’t be easy to describe the intensity of the performance, its story and its message. Michael Kahn’s final masterpiece as Artistic Director of the Shakespeare Theatre Company, The Oresteia is an opus.

Three plays in one: Agamemnon, Libation Bearers, and Eumenides, The Orestia starts with the homecoming of Agamemnon, King of Mycenae (Kelsey Watson) and his concubine Cassandra (Zoë Sophia Garcia) from the Trojan War, only for both to be killed by Queen Clymtemnestra (Kelley Curran) in retaliation for the sacrificial slaughter of their daughter Iphigenia (Simone Warren). (It conveniently leaves out Aegisthus, the lover she takes in Agamemnon’s absence, which may make her actions more tolerable, and thus, her a more likable character.)  It continues many years later with their son, Orestes (Josiah Bania), returning to reunite with their other daughter, Electra (Rad Pereira), and exact his own vengeance: killing his mother to avenge his father’s murder… on the orders of Apollo, of course. And the final part of the play is how all of this ends up forming the democratic judicial system, in which we accept the decision of our peers and don’t violently retaliate against wrongdoers. 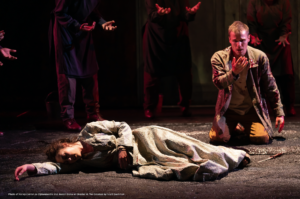 With messages of justice through retaliation, moral responsibility, and the “curse” of being born into violence, this play — rarely performed in its entirety — questions everything.  And that’s the best part.

“I’ve always wanted to do all of The Oresteia,” said Kahn, explaining that he became “enthralled” with this true classic of Greek theatre, in college, “fascinated by … the incredible depths of what is was about.” He chose it for his final STC stage work because it hits at the heart of many struggles of human nature that we face even today, epic in scope and sentiment. 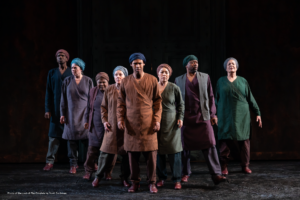 The Oresteia is brilliantly adapted by Ellen McLaughlin, who takes this powerful play and writes it for modern audiences with modern resonance. She claims that is not judgement, but actually “hearing and recognizing each other” that is the power of the final act.

So, you’ll go see it because it’s the culmination of Kahn’s 33 year career.  Will you like it?  Perhaps, perhaps not.  Yet you will think about it, just as the Athenians meant you to do, long after seeing it on stage.  And you’ll give credit to Kahn for taking on a project of this magnitude and complication — as only he can do — to engage and educate.

Runtime: 2 hours 20 minutes with one 15 minute intermission.  The Oresteia must close June 2nd.