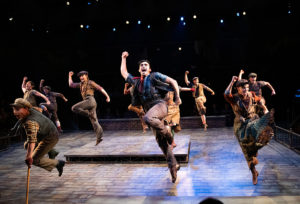 Right now at Arena Stage at the Mead Center for American Theater it’s the summer of 1899, and the newsboys of New York City are about to take on two of the most powerful men in the country — Joseph Pulitzer and William Randolph Hearst — and win. Inspired by true events, the Broadway smash hit crafted by powerhouse team of Alan Menken (music), Harvey Fierstein (book), and Jack Feldman (lyrics), is a relevant-today testament to the power of standing up and speaking out. The high-energy Tony Award-winning musical Newsies is a buoyant holiday treat perfect for the whole family.

Newsboy Jack Kelly dreams of a better life far from the hardship of the streets. When greedy corporate

tycoons raise distribution prices for the “papes,” cutting into paperboys’ meager wage, Jack finds himself at the center of a cause he wasn’t seeking but nonetheless shoulders, organizing his motley crew into a union and strike. Newsies isn’t a historical deep dive or gritty treatise on labor inequality, but a sweet underdog story with plenty of heart and inspiring message. (This reviewer’s 9-year-old son was riveted throughout.) 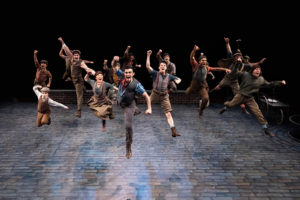 Yet the real star of the show is DANCE. Ken MacDonald’s set is cannily minimalist to leave plenty of space for stomps, kicks, splits and twirls, which abound. Choreographer Parker Esse marshals the cast into explosive energy and movement, taking full advantage of the theater-in-the round. Your feet will twitch and tap through polished big-Broadway style numbers. Prepare to be blown away by tap prodigy Luke Spring (Elmer), of Ellen fame, in the headline number King of New York.

Newsies offers a perfect holiday outing for all ages. Because who doesn’t love a grandiose, rollicking musical number with lots of stomp and pizzazz?

Newsies is playing at Arena Stage at the Mead Center for American Theater through December 29, 2019 (1101 Sixth St. SW, Washington DC 20024). Running time: 2 hours and fifteen minutes with one intermission. For information or tickets call 202-488-3300 or click here.