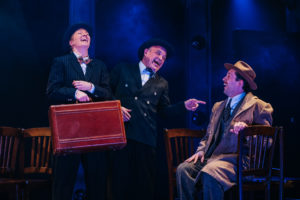 Constellation Theater’s production of 39 Steps is a rollicking good time for all ages. A not-so-classic film noir, the stage version of 39 Steps is an antic farce of the original film by the same name, adapted by Patrick Barlow, and paying homage to the genre and its master, Alfred Hitchcock. This dazzling, dizzying spoof brims with murder, beautiful women, and intrigue, and is a joy for anyone who loves the magic of theater.

Based on the 1935 British thriller film directed by Hitchcock, a cast of four actors (Drew Copas, Gwen Gastrof, Patricia Hurley, and Christopher Walker) embody over 150 characters in this fast-paced and riotously funny remix. 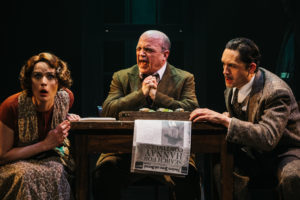 In 1930s London, the dashing Richard Hannay starts his evening at the theatre and ends it mistakenly accused of murder. Caught in a maze of espionage, near-death escapes, and flirtatious entanglements, our hero careens across England and Scotland in search of a plausible alibi and the true identity of the killer. This two-time Tony- and Drama Desk Award-winning whodunit is both utterly ridiculous and ridiculously entertaining as it lovingly spoofs the iconic cinematic tropes of film noir. 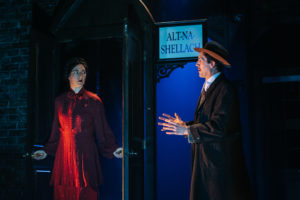 Directed by Nick Olcott, the cast is campily clever and protean in their fluid transition between roles, from damsel in distress to detective. Gastroff and Walker, in particular, earn praise as they play a multitude of characters at a brisk pace, always maintaining comic rapport. A.J. Guban’s minimalist stage adapts from moor to mansion and keeps it simple to let the attention remain where it should, the tirelessly working cast. Guban’s lighting deserves its own curtain call, creating striking silhouettes and streetlight ambiance essential to the parody. Nods to Hitchcock throughout will make you want to head home for a black and white Netflix film noir marathon. 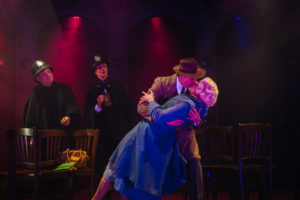