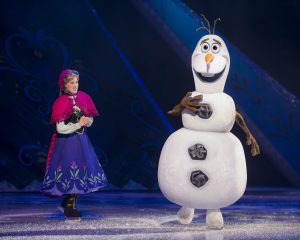 If you’ve spent this past week ooh-ing and ahh-ing at the Olympic figure skaters gliding across your television screen, consider grabbing tickets to Disney Presents Frozen on Ice.

It’s not exactly PyeongChang, but spins, jumps, and lifts abound during the two-hour performance; and there really is something magical about seeing a winter-themed story unfold on actual ice. 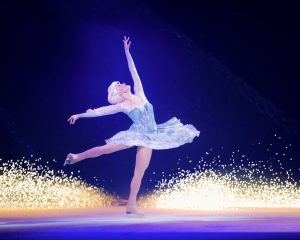 of the pyrotechnics could use a little finessing, the costumes and set design were lovely to watch. The character Elsa’s now-legendary “Let It Go” performance was actually breath-taking set against blue lights, smoke and falling snow, even for a Frozen skeptic. And the crowd– by which I mean adorable kids dressed up in Disney costumes– went absolutely wild.

Disney Presents Frozen on Ice is now showing at the Capital One Arena through February 19.

Previous Post: ‘The Great Society’ Sets The Stage On Fire
Next Post: Black Panther Screens at the National Museum of African American History and Culture