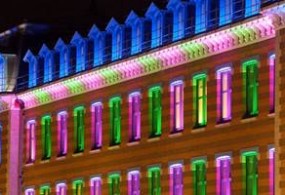 Today (12/12) through the weekend, Georgetown is offering a new, FREE holiday event that includes the region’s only curated outdoor exhibition of modern light-art installations set against the historic backdrop of DC’s oldest neighborhood. 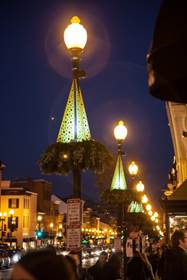 As you tour the public art works, take a self-guided tour of the shopping district’s window decorations, all put in place for Georgetown’s the third annual Holiday Window Competition (You can vote for your favorite, through December 17, via a dedicated photo album hosted on Georgetown’s Facebook page). And join in the holiday sprit all weekend long, as you come across strolling carolers, live outdoor musical performances on the lawn of Grace Church (1041 Wisconsin Avenue), and maybe even work alongside internationally-known artist Luisa Alvarez of Travesias de Luz to install The Soul of D.C. at Georgetown Park and Cady’s Alley.

Sponsored by Jamestown Properties and Eastbanc

Inspired by the streets, architecture, history, people, and environmental landscape of Georgetown, Luisa Alvarez of Travesías de Luz creates scenes of illuminated figures and integrates them within the neighborhood. Alvarez has shown work in Georgetown before, as part of Fete de Lumieres D.C. and at the Fete des Lumieres in Lyon, France.

Lit From Within consists of approximately 200 two-by-fours and four Halogen lights, and describes the energy and warmth within a home. Once the work is de-installed, the majority of the wood will be given to Habitat for Humanity.

Sightline explores the possibility and promise of connection. The work focuses on two video screens of two eyes—the artist and his wife—as each interacts and engages with the other across a void. The eyes look back and forth, open and close, and the gazes occasionally meet. At the instant the eyes meet, a string of lights illuminates and makes the connection physical.

The ten-foot Tree of Cross-Habitation is a light sculpture composed of paper LED lanterns shaped as houses. The organic structure of the houses reflect the many adaptations made in living arrangements in the face of adverse environmental, economic and political conditions—from the ad-hoc arrangements of semi-employed and unemployed populations, to the multi-familial, multi-generational homes of immigrants. Whereas the term 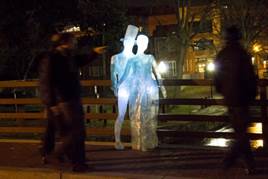 ‘inhabitation’ connotes a gradual stabilization of a dwelling, Tree of Cross-Habitation refers to the daily inventions and negotiations made by home-makers in order to navigate perpetually uncertain environments.

As a boy, Bob would lie beneath the Christmas tree so the lights would fill his field of vision.  Later on, Lisa put herself through the baler chute at a holiday tree stand.  For Georgetown Glow, the artists still see things sideways. Inspired by the trip home from the tree farm, Tree Roast/Snow Dome explodes the traditional tree, placing it somewhere between a Yule log and a disco ball. Tree Roast/Snow Dome is equal parts nostalgia and mischief: the glee of tipping the tree over, and the wonder at the first snowfall.

Sponsored by the JBG Companies

The goal of artist Jason Peters’ work is to trigger and explore intellectual and emotional reactions to the ways in which objects interact with their environment. His recent work, includingThe Glow at Jefferson Court, makes use of found objects—in this case, buckets—as modular elements that when interconnected, create new forms. By using large multiples of discarded items in repeating designs, trash is made beautiful through alliteration of form.

re:collective creates work that bridges distances between planes of existence using new media, performance and installation. Project 2014:001r-GLOW includes a series of recorded video performances made at sponsor LSM, with the company’s employees as volunteer participants. The resulting projection, through planes that appear surreal and physically unlikely, aims to expose the innumerable interactions that take place within society and how those are exposed as uniquely human.