Chicken and waffles are so over. 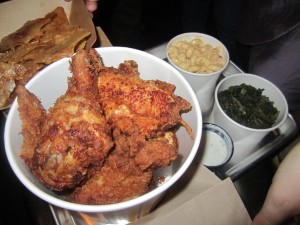 2013.  And just where might you snag some of this golden, brown deliciousness, including a “sandwich” that combines the two — with bacon, of course?!  At the new GBD (which actually stands for Golden, Brown, Delicious).

The Neighborhood Restaurant group’s (Churchkey, Birch & Barley) newest offering is a cozy space that extends from Connecticut Ave. to 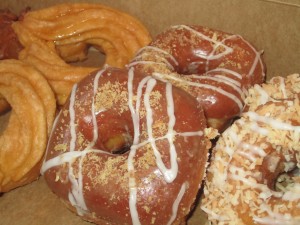 18th Street (you can literally walk in from either “address”), with about 50 seats and an endless way to enjoy chicken, doughnuts, and the two together. (Remember the sandwich mentioned above? It’s named for Luther Vandross.  Apparently, the singer shared your “thing” for fried chicken sandwiches with doughnuts as bread.) 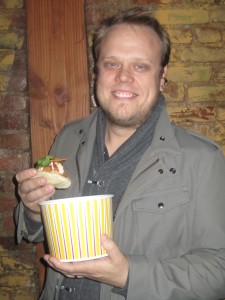 — Tiffany MacIsaac offered up overwhelming varieties of the sweet, fried fare and Greg Engert lorded over the taps of his “small” beer menu — only ~20 types as the “spirits side of the beverage program” is focused mainly on punches (Try the rum, bourbon, gin… we can’t decide on our favorite!).

From straight up strips or a bountiful basket with sides, between sweet potato bread or on a bon mi bun… chicken’s newest duet with the doughnut is a 2013 Must Munch.