Foto DC‘s 2013 Cherry Blossom and Spirit of DC event was a bright respite from a grey week, held at

Three highlighted photographers showed featured pieces which captured the essence of the Capital City, those works interspersed among entries in an open “Spirit of DC Photo Contest” (which remains open until April 18th, so grab your point and shoots and start snapping!.

Spotlighted photographer Ron Blunt posed in front of his favorite print, an organic triptych with a very Japanese feel.  Other than his own, Blunt’s pick for ‘brightest of the bunch’ were thumbnail, Pinterest “Best of the Week” posters. 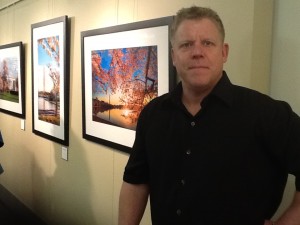 Randy Santos (right) another of the featured guest photogs, just couldn’t chose a favorite picture with which to pose.  His large scale photographic images — which he prints at the local Dodge Chrome — grace major corporate and hospitality buildings (another aspect of the true Spirit of DC)!