Twenty years ago, while living outside of Marseilles, France, Maury unknowingly began his career as a painter.  When he couldn’t find any modern animal artwork to adorn his kitchen walls, he did what any problem solver would do — he painted them himself!  During a dinner party, a friend well versed in art noticed his talent and encouraged him to pursue painting.  With this prompting, Maury quit his job working for a construction firm and took a chance on his newfound passion. 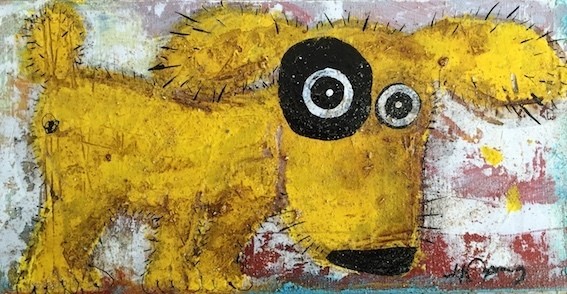 Since then, the French artist has made a name for himself in the art world based on his unique use of mixed media and his passion for depicting animals in a playful way.  (A set of three large polar bear paintings currently decorating the hotel restaurant’s back wall were used in a notable campaign for the iconic designer Hermes.)  Other canvases splayed across the restaurant-turned gallery, showcased images of cats, dogs, fish, mice and butterflies painted using a neutral palette with accents of reds and yellows.

Maury noted that the big round black eyes he paints on all of his animals are a key feature of his brand. To Maury, eyes are an equalizer between humans and animals.

Upon arrival at the personal appearance event, each guest was given a selfie stick and invited to participate in the evening’s selfie contest using hashtag #soDCbutterfly.  Not only was this a creative way to interact with Maury’s art, but the winner of the “best selfie” was slated to receive a $200 gift certificate to iCi Urban Bistro!

In addition to passed hors d’oeuvres and selfie playfulness, the restaurant also offered a $45 pre-fixe menu inspired by Maury’s art work that will continue for the duration of the exhibit. Sofitel General Manager, Mathieu Riviere described the important connection between art and food as both being outcomes of a similar creative process. “If you combine the culinary and art world it’s the best of both worlds,” Mathieu observed.

Previous Post: This DC Passport Gets You 2-For-1 Drinks All Summer
Next Post: JW Marriott Unveils Multi-Million ‘Bespoke’ Renovation