One of your local farm-to-table favorites has already introduced its own gin and its own rye, to much fan favor.  So what’s next when you’re stable is full of successful sprits?  Build the Barn!

Last week Farmers, Fishers & Bakers, one outpost of the ever-expanding Farmers Restaurant Group, introduced its latest proprietary pour, “Barn White,” created in conjunction with Brooklyn Oenology, based in NYC, and now available at all Farmers restaurants. 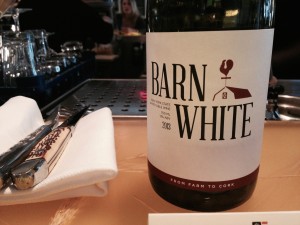 “John Arroyo (FRG’s Bar & Beverage Director) had been featuring some of my wines on the list here for a little while, and he approached me and asked if I’d like to do a custom wine for the restaurant,” shared Brooklyn Oenology President & Winemaker Alie Shaper, at the private unveiling.  The two worked closely for some six months to blend Barn White, a light, crisp white wine blend that is a match for a wide variety of items on Farmers Restaurant Group menus.

Barn White is “a drier white wine that’s very pairable,” according to Shaper.  “It was really designed to go with the menu — a little bit of everything.”

It’s comprised of a blend of 70% Chardonnay, 15% dry Riesling, and 15% Vidal Blanc grapes grown in the Catskills and upper Hudson Valley of New York state.   Arroyo tells KSM he’s looking forward to suggesting it with FFB’s oysters, poultries, salads, and even the pork chop!