Also among the honorees were Linda Sarsour and Beverly Bond, two women recognized by the Obama Administration for their accomplishments. K Street Magazine spoke with both of these inspiring women before the night’s awards kicked off:

KSM’s Miranda Houchins: Black Girls Rock! Founder Beverly Bond, you continues to make an impact in the community and to the way woman identify themselves culturally by celebrating the esteemed contributions of minority women. What does it mean to you to be here today?

Beverly Bond:  “To be honored by the YWCA, one, is something that I would just never expect. To have an organization, that is this prestigious and this old — it’s one of the oldest woman’s organizations… [She’s right! YWCA is the largest and oldest women’s organization in the United States] — to be able to do something that is being recognized by the YWCA… it’s a big deal!  It’s a huge deal and I’m honored to be a part of it and I’m honored to have the chance to pay more attention to this organization. I love what they do and I love what they stand for.”

MH: Rumor has it the First Lady has recognized you as well!

BB:  “She spoke with us [at the BET’s Black Girls Rock! event in April], and we were honored to have her presence.”

MH: That amazing! Actually, I use to intern at the White House and one of my bosses had a coffee mug with your company’s name on it!

MH: You’re obviously doing big things — congratulations! — so I guess we have to ask, what’s the next move for you?

BB:  “Really continuing to fight for the rights of women and girls, and just making it bigger and better. It’s a lot of work to do. We focus a lot on battling media messages that are harmful to our girls and there will continue to be some of that. We will just continue on this path… I don’t know if it’s bigger; I think it’s just as intense and more deliberate and maybe having a bigger team doing it.”

___
In 2011, Linda Sarsour, was honored by The White House as a Champion of Change.  A working woman, community activist, and mother of three, 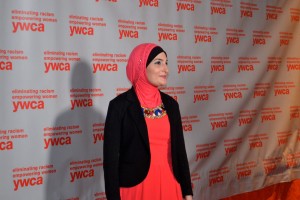 whom the White House calls “an ambitious, outspoken and independent woman who continues to shatter stereotypes of Muslim women while also treasuring her religious and ethnic heritage,” Sarsour is the Director of the Arab American Association of New York, (a social service agency serving the Arab community in NYC).

MH: What does it mean to you to be here today and honored in such a great way?

Linda Sarsour:  “As a woman and as a racial justice activist, I am very honored by the YWCA which is about eliminating racism and empowering woman and to be here among activists from the across the country is so inspirational.”

KSM: The recent Abercrombie and Fitch court ruling has led to some waves of justice for minorities across the board. What do you see in the future for this type of progress, and how can we do this?

LS:  “The Supreme Court discussion on Abercrombie and Fitch was a huge success and victory for a community that has continued to feel targeted in large by domestic America and has set the precedent for other communities, and especially other religious communities. I just want this progress to continue as communities continue to organize together and build together.”

KSM: This Supreme Court story has gone viral! Do you see wide spread communication as a way to continue down this path?

LS:  “The plaintiff in the case — she’s a woman, and she’s wearing hijab — she defied every stereotype that the American people have about what a Muslim woman is and what she stands for. The fact that she fought back and continued to fight back until she got to the Supreme Court was a moment where I think people were like, ‘Wait a minute! Maybe they are not what we think they are; Maybe they are confident; Maybe they are independent,’ and I think that’s the message that makes a connection.”

Previous Post: Where to Eat in Washington? #RAMMYS2015 Winners!
Next Post: Screen on the Green Announces Summer 2015 Schedule