DC Beer Week kicks of September 24th through October 1st this year.  It’s a week where you can taste all of the brews the city has to boast about… including this year’s Solidarity Brew.

In advance of the annual DC Beer Week, a collection of local brewers get together to decide what type of beer to collectively showcase during DC Beer Week. This is a unique and truly local process, as members of the Brewer’s Guild pitch in malt, grain, yeast, and hops, while one brewer creates the beer.

This year’s featured beer is a Grisette brewed by 3 Stars Brewing Company, which describes it as “working class table beer originally brewed for miners, factory 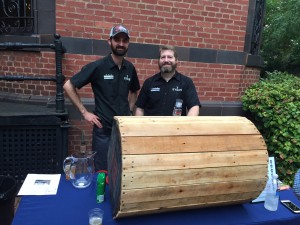 workers, and farmers with a light body.”

If the name Grisette doesn’t sound familiar to you, don’t be surprised. This type originated in southern Beligum, and while similar to a Saison, has a lower ABV (5.3%) that is dry hopped late in the brewing process, which in turn adds a complexity of flavor and depth primarily only found in heavier beers. Ingredients were donated by Copper Fox Malting, Hellbender Brewing, Atlas Brew Works, Denizens, Port City Brewing, and District Chophouse this year.

Be sure to check out this year’s Solidarity Brew at beer-bars throughout the city starting September 24th.