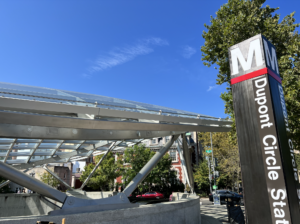 “Metro is very happy that this project is over,” Metro General Manager Randy Clarke said standing outside of the North entrance to the Dupont Metro Monday morning with members of the Dupont BID, WMATA, and local DC government staff, all celebrating the completion of the Dupont Metro Station’s North Entrance Canopy Project.

After about 3 and a half years, construction of the largest Metro canopy ever built is finally complete, and the wooden fencing obscuring the sidewalk and plaza and precluding pedestrians from walking through it has been removed. 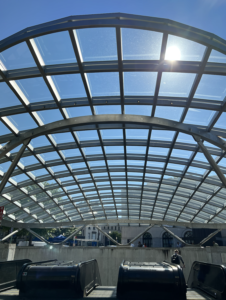 The canopy, like others built around DC, was necessary not only to protect riders from inclement weather but also to shield escalators from the elements, which should cause them to require less maintenance and prolong their useful life.

The Dupont Metro, which opened 45 years ago, happens to have one of the longest elevators in the system at 190 feet long, and its new canopy — with 200 individual glass panels and 13 steel frame modules — is the largest canopy in the Metro system at 1.5 times the size of a basketball court. 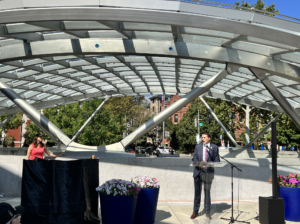 “This canopy is almost like a piece of art on top of the functionality,” Clarke said.

The design of the canopy was selected during a competition in 2001. To date, 43 such canopies have been completed, with nine left in development throughout the Metro system.

At the event, officials also lauded their proposed  “Dupont Plaza” project in the area, which would cover the Connecticut Ave. underground tunnel and pave the space between Dupont Circle and Q Street.

Previous Post: This New Logan Circle Resto Hotspot Has Tasty Plates and One of DC’s Largest Outdoor Patios
Next Post: DC Diners Are Feasting on This Collab — Yours Truly’s Duet Dinner Series