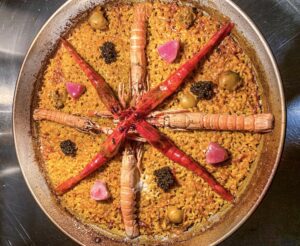 Paella for one at $70? Xiquet‘s Danny Lledo is taking his signature dish to a luxe level.  Named for the Duchess of Denia (Spanish nobility), the Paella de la Duquesa de Denia is a nod to swank while the economy is screaming save.

“I think that this unprecedented situation actually makes it more important for people to have the option for a luxury experience,” says Lledo. “Right now, so many things that people would normally take advantage of for relaxation — like travel or fancy vacations, for example — are pretty much off the table or very limited. So when people dine out, I think they are looking for a high-end experience, and my restaurant offers that. Of course, we also have more traditional paellas on our menu as well.”

“For this paella… we use freshly imported seafood, langoustines from Scotland, and fresh red prawns that we get directly from the Mediterranean. And of course, this dish includes two kinds of “caviar” — what we call “Valencian caviar,” which is the succorat, or the caramelized bits of rice you get when paella is cooked properly — and then the Russian Ossetra caviar,” says Lledo.

There’s no word on how long the Duquesa will be available, so get your order in for this opulence ASAP.