There’s singing and then there’s schwinging.  At the District Karaoke city-wide finals Monday night at PennSocial, DCers were on (ok, sometimes off) pitch for a party that celebrated the guts and glory of 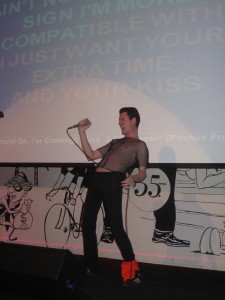 With eight teams from across the city competing over three rounds (two solo and one group performance) of vocal antics — like a disturbingly dramatic rendition of Tenacious D’s Wonderboy (above) and a spectacularly syrupy Pour Some Sugar On Me — judges from Listen Local First, the Getaway, Harikaraoke Band and, yes, K Street Magazine had the tough task of choosing the best of the bunch. 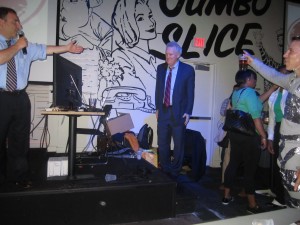 In the end, team Hold On, I’m Coming took top honors, a trophy (presented by Ward 6 Council Member Tommy Wells! (right)) and some other swag (not to be confused with the swagger they brought to the stage).  Team Batteries Re-choired followed in a close second before team Call Me Medley.

Open mic karaoke continued all night in preparation for District Karaoke’s next season — for which registration starts in a One, Two, A One, Two, Three… Now!